Native American culture is only a ghost of what it was before the European invasion swept across the continent. So fittingly, ghosts linger in the world of The Night Watchman, Louise Erdrich’s deeply personal homage to her grandfather and the Chippewa tribe of which he was chairman.

Set in 1953, the novel centers on Thomas Wazhashk, night watchman at a manufacturing plant on a reservation where Indian girls work at “white people” jobs – making jewel-coated bearings for defense department ordnance and Bulova watches. Thomas has learned that a U.S. senator has introduced a “termination” bill to remove the tribes from land guaranteed them by earlier treaties. As he puts it, “every so often the government remembered about Indians. And when they did, they always tried to solve Indians … They solve us by getting rid of us.” Thomas mounts a petition campaign to oppose the bill.

The factory girls like Patrice Paranteau are the lucky ones, as they have steady jobs. Most Turtle Mountain Chippewas are scrabbling for survival, living in tents or mud huts on poor diets. There are disputes and drunkenness. Patrice even finds herself briefly cavorting in a rubber ox suit in a Minneapolis saloon to earn cash while searching for her missing sister. Yet there are deep family bonds, hallowed 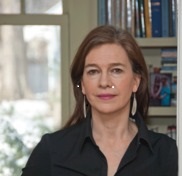 traditions, friendships and romances. The Chippewas are united in their poverty, bearing it with dignity, proud of their spiritual ties to nature and their ancestors.

Erdrich is at her best in exploring her characters’ perceptions of life. They put great stock in omens and visitations from the nether world. I particularly enjoyed Thomas’s encounter with an owl during a drowsy night while he’s on duty, and the way Millie Cloud sees the world in geometric patterns.

Without its occasional sexual references and general vulgarity, this would be a five-star book. Even so, I look forward to reading it again one day.

The author of twenty-eight books, Erdrich won the Pulitzer Prize in 2009 for her novel The Plague of Doves. She was also a 2012 Pulitzer finalist for The Night Watchman. She owns Birchbark Books, an independent bookstore in Minneapolis.