In his previous novel, A Gentleman in Moscow, Amor Towles had great fun creating a hotel oasis for an aristocrat in Joseph Stalin’s Russia. This time his pattern is a mishmash of heroic legends based largely on Homer’s Odyssey, as four 1950s youths embark on their own quests. 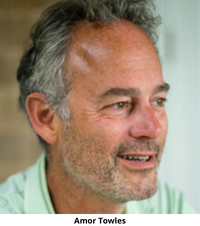 Two of them, Emmett and Billy Watson, are brothers, bent on traveling the Lincoln Highway from Nebraska to San Francisco in search of their mother. The other pair, Duchess and Woolly, are escapees from a reformatory, bent on claiming a stash of cash in the Adirondacks from Woolly’s wealthy family.

All four get caught up in a madcap saga with echoes of Ulysses’ journey homeward from the Trojan War. Instead of a ship, we get a stolen car. The Cyclops becomes a vagrant preacher. Ulysses is a World War II veteran wandering the landscape in railroad boxcars.

The characters are distinctive and delightful. Billy, a bright eight-year-old, carries with him a book of heroic tales which he shares with anyone who will listen. Duchess is the streetwise son of an itinerant Shakespearean actor. Woolly is a dysfunctional reject of several elite prep schools. Emmett, the most responsible member of the quartet, suffers constant buffeting from the winds of chance stirred up by his companions.

An adventurous spirit pervades the novel, told in rotating viewpoints by the characters. Just when you think things are going to work out, a new snag emerges to send it in a new direction. The narration is clever and amusingly philosophical.

Amor Towles possesses a staggeringly bright imagination and an unsurpassed talent for storytelling. A five-star rating would be automatic for this novel, had he not tarnished his work with sprinklings of foul language and profanity. Hence, I limit it to four stars.