Best Recollections: The Lathe of Heaven

This is another installment of treasures from my bookshelf. Though I am loath to part with any of my books, some are so special that I wish I could erase them from my memory and read them again for the first time. An appropriate lead-in to today’s subject.

The Lathe of Heaven is, in my opinion, the best of Ursula Le Guin’s science fiction novels. Her protagonist, George Orr, has the power to change reality simply by dreaming. The dreams are so potent that they even change people’s memories of the world as it was before. 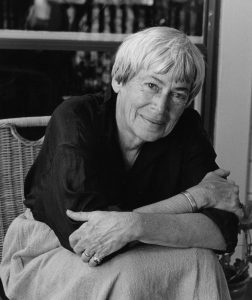 rge remembers how things were before his dreams. Terrified of his ability, he takes drugs to suppress it, leading to a visit with a psychiatrist who tries to exploit his patient’s talent. The result is a series of disasters that are both comical and apocalyptic.

The author speaks to us from an era of growing concern about environmental catastrophes. George’s world is polluted and overpopulated. Dr. Haber, the jovial psychiatrist, has good intentions toward alleviating these miseries, but is ill-equipped to do so. “The doctor was not,” George thought, “really sure that anyone else existed, and wanted to prove they did by helping them.”

Though the novel appeared in 1971, I was unaware of it until I saw a PBS version broadcast in 1980. The low-budget quality of the film is apparent, but overall it is satisfying due to some clever staging and fine performances by Bruce Davison as George and Kevin Conway as Dr. Haber. It’s available for purchase, but be aware that the picture quality is substandard because the original negative was lost.

The best experience comes from the book itself, penned only as the magnificent Ursula Le Guin could have done. Science fiction, like most literature, is at its best when it is thought-provoking. If you haven’t read The Lathe of Heaven yet, I envy you.